The theme of this pilgrimage is in the footsteps of the Holy Father, Pope John Paul II.  On the third day we visited the birthplace and home of the Holy Father, John Paul II.  He was born in a small Polish village but with him becoming Pope, it has become a very important part of Poland.  They have turned the apartment where he lived as a young boy and the rest of the house into a great museum.  The museum shows his beginning and his life story.  It was a miracle that he survived through World War II and what made him the person that he became.
Next to his modest home is the church that Pope John Paul II spent a lot of time in.  It is well adorned with memories of Pope John Paul II in many places.  We have learned a lot about Pope John Paul II and what he did in his lifetime.
I have enjoyed having part of my family with me.  Nana Sue and I always have a good time together.  Erin, Chele, Haley, and Nicky are with this trip too.  The highlight of the tour has been getting to know Mikey Murry.  He has been in a great mood (most of the time) and has warmed up to everyone on the tour.  He always says Papa when he sees me.  He has seen a lot of new experiences here as well as getting a lot of attention from his Aunts and the rest of the tour group.  I will have a blog dedicated to Mikey on the tour later on.
The highlight of this visit to the hometown of Pope John Paul II for Mikey was getting his first real dessert, the dessert made famous by Pope John Paul II called the “Pope Cake”. 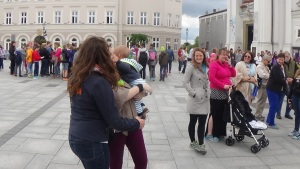 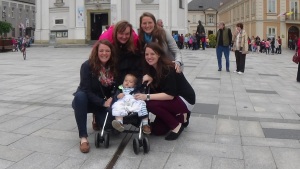