Oringally building the g-scale drawbrige was planned for much later in the project as I knew this would be complicated and would have to be built from scratch.  No vendors that I found offer a  drawbrige.  But working on the layout, the bridge was in a main path and during the work on the mountains, I cut out a slot and removed the track to give better access to the layout.   This made walking around and wheel barrow access so much easier that I decided to put together the drawbridge ahead of schedule and at least make it manual so I can run the trains but gain easier access to the rest of the layout when working on it.

Last year I was at the Southeastern Regional meeting and while visiting a layout, I saw a picture of drawbrige on a g-scale layout.  I inquired if they had plans or pictures and where was this drawbrige.  Unfortunately the layout had been torn down and no pictures other than on the wall.  The owner did say that we was throwing out part of main bridge as he no longer needed.  After seeing it I asked if I could use it and into my car it went.  While this was the basic bridge, I still needed to create the pivot point and a way to anchor it on both ends.

I spent some time on the engineering of the pivot point.  I decided that I needed a way to wire in the electrical for the track itself and used a LGB 1015U.  After attaching the track to the bridge, I needed to create a pivot point on the end of the track.  After a little experimentation I found that the center of the pivot point needed to be on the top edge of the track.  This position created a very clean lift and also when it is was in final position.   Unfortunately the pivot point had to be created using additional supports becasue the bridge structure was not a the pivot point.  I purchased aluminum thin bars and alumunin dowel rod and using stainless steel screws created a framework to attach the dowel to.  I drilled and tapped the aluminum dowel to anchor it with a screw.  Then using plastic wire ties, I experimented with moving the framework to find the right exact place.  I then created a wood support at the base for the dowels to sit on.

Lastly I created a slot for the other side to be positioned correctly.  The slot is actually cut from an alumunium pan from Hobby Lobby.  I then wired up the track to work correctely with my Digitrax DCC system.  I have a zone for the bridge itself as well as for the a safety zone before and after.  Eventually I will set up the program to stop a train if the drawbridge is up but that is in the future.

The drawbridge works manually and sometimes the tracks need to be aligned but once it is down, the trains operate great.  It doesn’t look the best and needs to be engineered to last a long time but that is for the future.

For the future, I need to secure the framework to be more solid, build a better support at the base to last for many years.  I also need to add a weight system and motor system to allow the drawbrige to opened and closed automatically.  Always more projects. 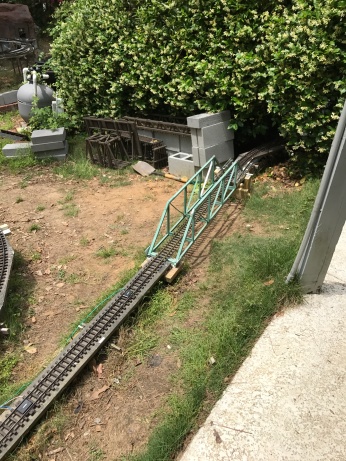 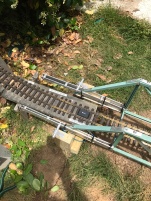 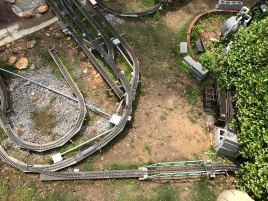 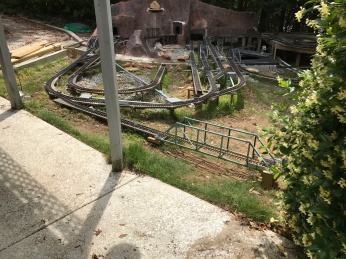