Suzanna and I have started our South American trip. We landed in Buenos Aires on our 38th anniversary and we had a great day. The people from Delta and Holland America took great care of us.

we met Father Bob from Cleveland in line boarding the ship and he found out about our anniversary.  Father blessed us at Mass.

We had a romantic dinner in the Pinnacle Grill and they even gave us an anniversary cake.

This cruise was nice because we stayed in port our first night. So no lifeboat drill, just very relaxing.

The next day we took an excursion to the city where we saw some very fancy graves, walked the streets of the old immigration section of the city, and had a typical Argentinian meal followed by music, singing and Tango dancing.

I even helped out some Georgia fans to watch the Georgia Auburn football game. It is always a challenge to watch live sport on the slow WiFi on the ship but I knew some tricks and we were able to watch about 50% of the game live.  They were very excited watching the game of course because they won.

A great start to our trip ! 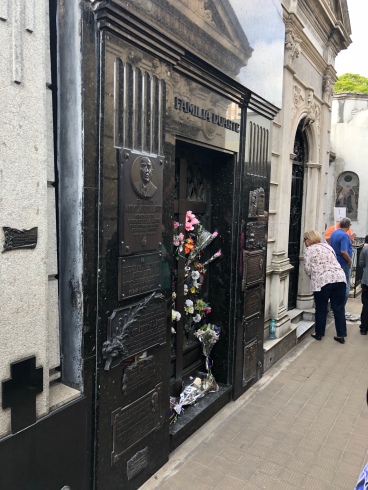