We arrived into Kathmandu Nepal and are sitting in the lobby of the Yak and Yeti hotel. Erin, Haley and myself are all doing fine. Dever and Julia Carney, my nieces are fine.

There was an avalanche above base camp yesterday morning in a very tragic accident buried many sherpa climbers. The news is still very sketchy but we were told this morning that 13 sherpas have died and 3 are still missing and several injured. .We heard about the avalanche on our hike to the Lukla airport yesterday and we all said prayers as we were hiking for the sherpas.

Details are still sketchy but it is my understanding that 5 of the Alpine Ascents sherpas were in the avalanche and 4 are dead and one is still missing. Alpine Ascents is the climbing team that we hiked with and who is working to help John Carney, my brother summit.

As we arrived into Lukla, our hotel was very close to the airport. A helicopter arrived with the bodies of about 9 sherpas and the injured sherpas. They worked to stabilize the injured sherpas and then helicoptered them down to Kathmandu for better treatment. Lakpa Rita Sherpa our head Sherpa, who was at base camp when the avalanche happened flew by helicopter to Lukla where he picked up the Alpine Ascents sherpas who died and flew them back to the families. A very large percentage of the Alpine Ascents sherpas come from 3 cities very close to each other. We stayed in Lakpa’s home village on the way up and met his parents.

A very tragic accident and my hearts go out to the families. 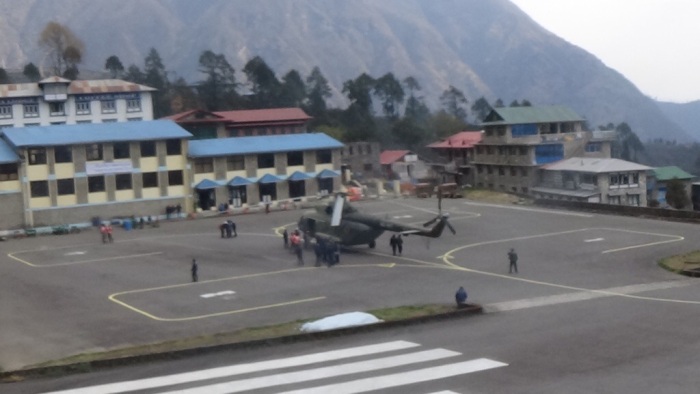 Bodies of the Sherpas being identified

3 thoughts on “Everyone arrived Safely at Kathmandu”